I visited The Salisbury Arms in June 2016 as part of our Food Club and had a very average experience: https://kimberleyinthecity.com/2016/06/29/the-food-club-the-salisbury-arms/ However, earlier this year it went through a refurbishment and Sam and I visited with a friend this autumn, where I had a much different experience.

3 of us chose The Salisbury Arms as a place for Sunday Lunch a few weeks ago. The large pub is split into different sections, so there’s plenty of seating, but we were sat next to an indoor fire-pit, which provided an intimate, warm setting. The menu didn’t seem too dissimilar from last time because there was a mixture of great sounding British options. Sam and Mike both chose the Trio of Roasts and I went for the Lobster & Devon Crab Fishcakes. Although I wasn’t a huge fan of the roast on my last visit, I was very jealous when theirs was plated up. The meat was served traditionally with roasted veg, but it was the cauliflower cheese that caught my eye because I’m a big fan and it’s not always included in restaurant roast dinners. The beef, chicken and pork were also served with Bramley apple butter, crackling and stuffing wrapped in bacon on the side. 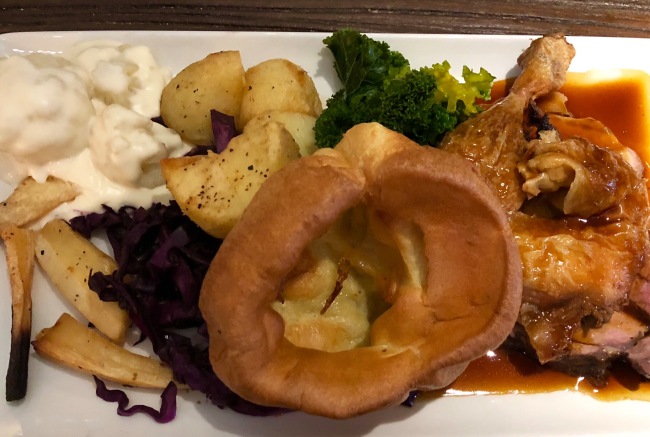 The main thing that caught my attention on this visit was that it felt as though more care and attention had been put in to the food. When I saw the roasts, I was concerned that I had made a mistake with my order, but I was more than happy with my choice as soon as I tucked in! The fishcakes were accompanied with asparagus, pea & truffle oil velouté topped with crispy seaweed and your choice of salad or fries – I chose the latter. The cakes themselves were hearty in size and flavour, which is what I look for in a Sunday Lunch. I’m a fan of all seafood, but especially crab and lobster, however the addition of truffle and asparagus cemented my choice and I felt all the components worked well together. I would have preferred a bit more seaweed because I didn’t think there was enough to really add to the flavour of the dish.

As much as I enjoyed my main course, it was the dessert that I would recommend everyone to dine here for. From the get go, the Melting Golden Chocolate Bomb was always going to be my dessert of choice. This chocolate delight was served with caramel ice cream, popping candy and oozings of hot Devon cream toffee sauce. Watching the bomb dissolve under the hot sauce was a delight for the eyes and every last bite was a delight for the palate. 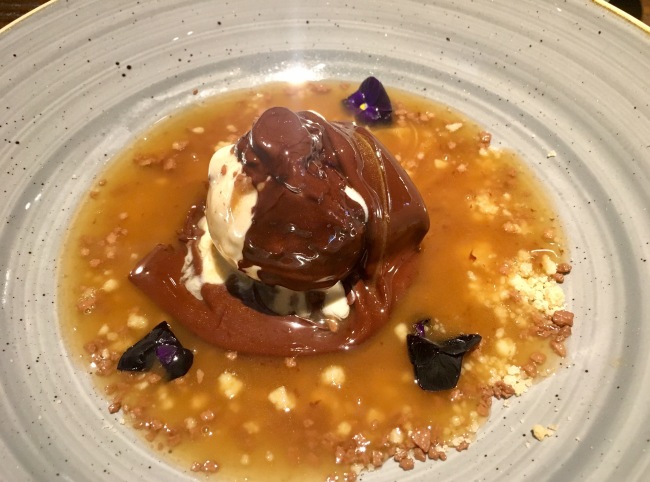 Overall, my experience at The Salisbury Arms was very positive. I felt the presentation and quality of the food was better than my last visit and the service was good, with nowhere near as long a wait as previously. I would recommend the Salisbury Arms Sunday menu for friends or family looking for a relaxed afternoon with some good British food.

🏴󠁧󠁢󠁳󠁣󠁴󠁿🏴󠁧󠁢󠁳󠁣󠁴󠁿🏴󠁧󠁢󠁳󠁣󠁴󠁿 Burns Night is all about haggis and my menu for a (pretty) traditional Burns Night dinner is now live. BUT it doesn’t have to be haggis, neeps & tatties this weekend. Previous years I’ve enjoyed haggis scones for breakfast, haggis pizzas and this year I’m thinking haggis quesadillas and/or nachos 🤔
There are no words for how good this was 🤩🤩🤩 I was drooling at the sight of it and didn’t want it to ever end. The focaccia alone was incredible, never mind the genius fillings. @albys_leith you know what’s good!! 🥪 slow cooked ham hock, savory cabbage, mustard, cheddar, Branston, homemade crisps & rocket. WHAT A ROCKET IT WAS 🚀
Trying to brighten up Blue Monday 🌸💙
GOOD MORNING EDINBURGH 👋🏼 Thanks to the @thebalmoral team for the warm welcome and delicious tea & shortbread yesterday morning. It was great to have a nose around the suites that attract the rich & famous (easy to see why with these views), and to meet so many lovely women through @witscotland 👸🏼🏴󠁧󠁢󠁳󠁣󠁴󠁿 P.s the JK Rowling suite will always be my fav (not pictured)🤓
Already thinking about what to have for brunch this weekend 🐷 2020 brunches have been mainly homemade, but my last brunch of 2019 was spent at @educatedflea and featured: 🍳 brunchos 🍳 duck hash cakes 🍳 feta & pistachio dip The ‘brunchos’ was definitely the highlight, but all the food was yum and it’s a cute little spot. I would definitely go back for the brunch menu or for lunch or dinner✨
I’m guilty of always wanting to go on trips and eat out, but I’ve literally had the best weekend relaxing at home 🥰 This Sunday brunch was sponsored by @whatiateforbreakfast katsu halloumi 🤤 I enjoyed changing up the usual avocado on toast and this was yummy and filling 🧀🥑
When you’re trying to be healthier and save money, but all you can think about is the Mac Daddy Benedict from @loudonscafe 🤤 It’s an English muffin topped with haggis, pulled pork and mac n cheese, with poached eggs and chilli jam 🧀 Any recommendations for homemade brunches welcome!
The fun’s over, but it wouldn’t be Christmas without catching up with good friends over good food... @roosleap is still the same as always, but we’ve changed from drinking Shirley Temples to Shirley Mentals 🤪 The Thai Chicken Salad is my new fav, but the quesadillas will always be a home comfort. I love how food can bring back so many memories! 🧡 FYI it only takes 3 pints of Shirley Mental to start dancing on the sofa to musical soundtracks 💃🏼
🌟2020 with the best🥂