My boyfriend and I visited Northeast Italy for a long weekend, but we made sure to make the most of our time!

When we decided to head to Italy and make Bologna our first stop, I was extremely excited because it’s the Food Capital of Italy. And being a country that’s known for it’s delicious cuisine, it’s quite a title to hold. Sam has spent a lot of time in this region for work, so after arriving at the airport on Friday night, I followed his instructions and headed straight for Matusel, an Italian restaurant.

From beginning to end my experience here could not have been any better and it’s definitely in my top 10 restaurants around the world. I indulged in red wine, tagliatelle al ragu and cooked tuna with sweet onions.

I’m not normally a huge Bolognese fan, but since this is the home of the dish I felt I had to give it a try! I’m glad that I did because it was outstanding, along with all of my meal. The service at Matusel was magnificent; we never wanted for anything and we were gifted limoncello and cannoli, which were simply divine.

Bologna is a lovely city, with brilliant views. We walked through the streets to the Towers of Bologna where we climbed the 498 steps to the top of Asinelli Tower. Not being a lover of heights this wasn’t easy. But, because it was a Saturday it was pretty busy, which meant that climbing wasn’t too taxing because we had to break to let people past. The climb is most certainly worth doing because we were greeted with spectacular views over the beautiful city. 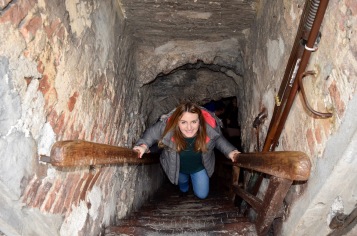 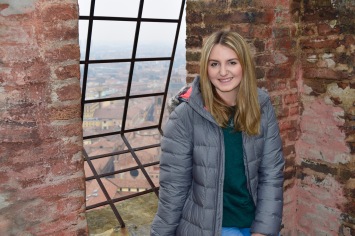 The best part about climbing to the top is that you can reward yourself with a gelato afterwards! Bologna played an important part in the ice cream industry because the ice cream machine was developed here. Once you have visited Piazza Maggiore, and studied the many medieval towers and buildings, visit Mercato di Mezzo. Here you can join the locals in feasting on mortadella and prosecco. Mortadella is a tasty Italian sausage, which is made in Bologna and is eaten with a selection of meats and cheeses. Don’t leave Bologna without enjoying this dish! 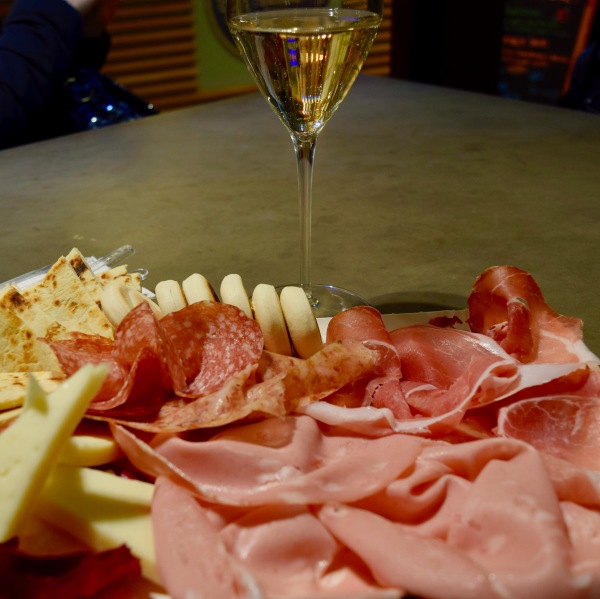 After Bologna we headed east towards Venice, but we stayed just north of the famous city, in Mogliano. We didn’t spend much time in Mogliano, but we did dine here on Saturday evening. We chose Da Pino, so we could fill up on pizza and prosecco and we definitely filled up! There was an hour wait because it’s so popular, but we went to a local bar and had an aperitif whilst we waited. We sipped aperol and listened to live music in Café Vera before going back for our pizza. 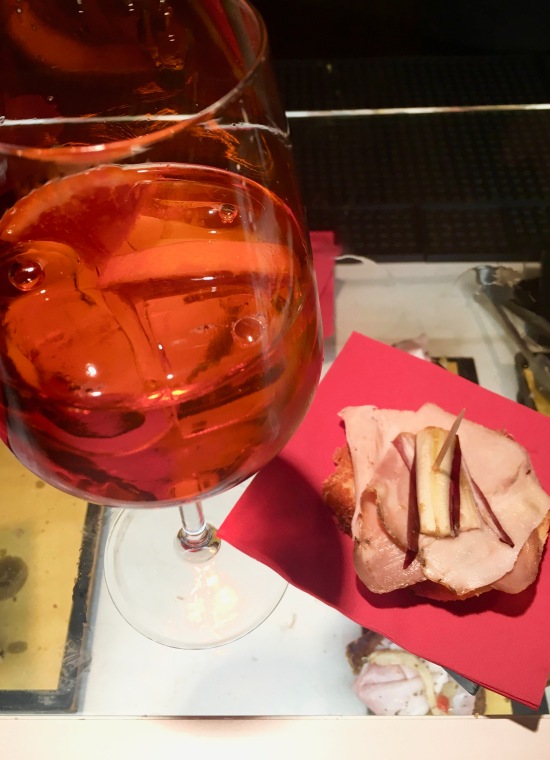 Once we were seated we already knew what we were going to order. At Da Pino you can order pizzas that are a metre in length! But, because we were just 2 people, we decided that the half metre pizza would be more than enough. We chose 2 different toppings and both were incredible. Half was the buffalo milk mozzarella and pachino and the other half was S. Vincent, which included seasonal vegetables and Parma ham. It was definitely the best pizza I’ve ever had; it’s easy to see why it’s so popular! 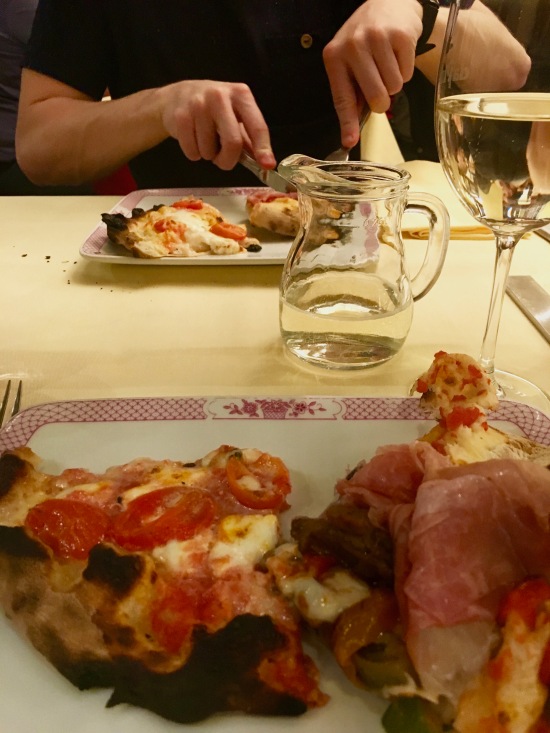 Mogliano is ideal for travelling into Venice for the day because it’s less than half an hour away by train. We were lucky enough to be visiting Venice during carnival, so the city was alive with people. We chose to spend our day wandering the small, mysterious streets and taking in the views of the beautiful canals and buildings. Although the city was incredibly busy, we managed to find quiet spots, which enabled us to really take in the city’s beauty. 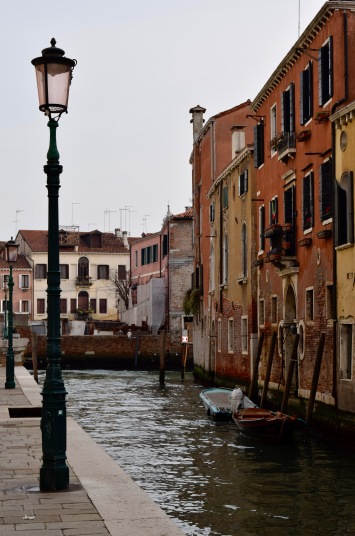 Moleche is soft shell crab that is normally deep-fried and is a Venetian dish that I really wanted to try. Unfortunately it’s only available in spring or autumn, so I chose fritto misto instead, which was fried fish from the Adriatic sea.

Another Venetian food that I was excited about was fritelle, which is widely available during carnival. We slipped into a little bakery and picked up a nutella filled one. A fritelle is fried dough, which is soft and it was packed full of gooey nutella – yummy! Venice is quite expensive for food and drinks because it’s extremely touristy. An Aperol spritz may cost less than 2 euro outside of Venice, but you can pay 3 or 4 euro in the city. 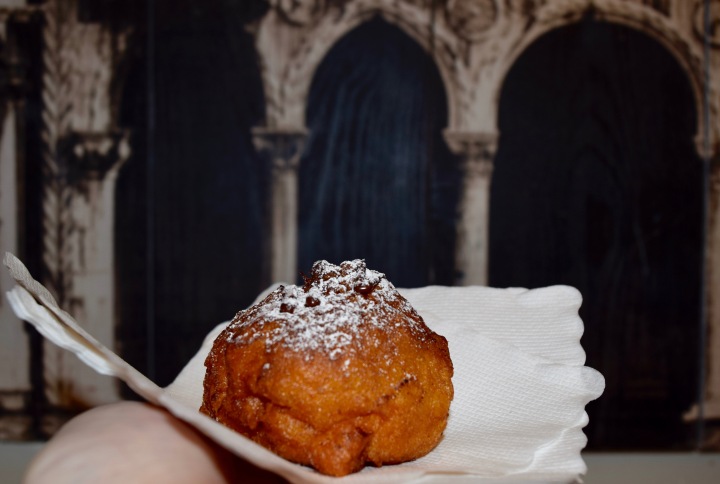 On the last day of our trip we drove to Modena, which is famous for its balsamic vinegar. We couldn’t visit this city and not go to Villa San Donnino for a traditional balsamic vinegar tour. Because we visited on a Monday in winter, we were the only people booked on to the tour. This was great because it gave us a private tour at our own pace. 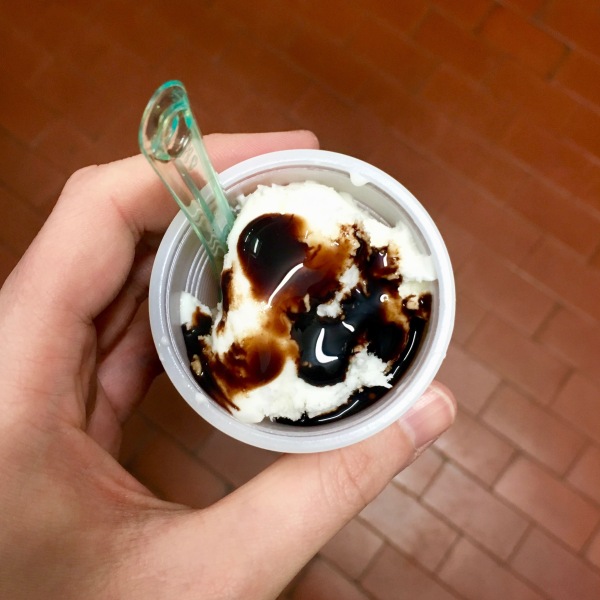 We wanted our last meal to be a good one, which left us with only one option – pumpkin tortellini. I’d heard about how good this dish is, but wasn’t sure if I’d feel the same. It’s served with Parmesan and balsamic vinegar and all I can say is OH MY GOD. It was possibly my favourite dish of the whole weekend, the flavours mixed so well together.

The northeast of Italy, and Emilia-Romagna in particular, is a great place to plan a trip filled with beautiful scenery and even more beautiful foods.

GOOD MORNING EDINBURGH 👋🏼 Thanks to the @thebalmoral team for the warm welcome and delicious tea & shortbread yesterday morning. It was great to have a nose around the suites that attract the rich & famous (easy to see why with these views), and to meet so many lovely women through @witscotland 👸🏼🏴󠁧󠁢󠁳󠁣󠁴󠁿 P.s the JK Rowling suite will always be my fav (not pictured)🤓
Already thinking about what to have for brunch this weekend 🐷 2020 brunches have been mainly homemade, but my last brunch of 2019 was spent at @educatedflea and featured: 🍳 brunchos 🍳 duck hash cakes 🍳 feta & pistachio dip The ‘brunchos’ was definitely the highlight, but all the food was yum and it’s a cute little spot. I would definitely go back for the brunch menu or for lunch or dinner✨
I’m guilty of always wanting to go on trips and eat out, but I’ve literally had the best weekend relaxing at home 🥰 This Sunday brunch was sponsored by @whatiateforbreakfast katsu halloumi 🤤 I enjoyed changing up the usual avocado on toast and this was yummy and filling 🧀🥑
When you’re trying to be healthier and save money, but all you can think about is the Mac Daddy Benedict from @loudonscafe 🤤 It’s an English muffin topped with haggis, pulled pork and mac n cheese, with poached eggs and chilli jam 🧀 Any recommendations for homemade brunches welcome!
The fun’s over, but it wouldn’t be Christmas without catching up with good friends over good food... @roosleap is still the same as always, but we’ve changed from drinking Shirley Temples to Shirley Mentals 🤪 The Thai Chicken Salad is my new fav, but the quesadillas will always be a home comfort. I love how food can bring back so many memories! 🧡 FYI it only takes 3 pints of Shirley Mental to start dancing on the sofa to musical soundtracks 💃🏼
🌟2020 with the best🥂
SPOT THE WILD ANIMALS 🦒 6 weeks has gone by in a flash and I’m still missing this place lots! If you’re not fed up of me harping on about it, my full review is up now 👍🏼
[insert meat sweats from now until 2020] 🍖🍗🍖🍗🍖🍗🍖🍗🍖🍗🍖🍗🍖 My second visit to @victorhugodeli left me just a satisfied as the first! I had concerns that the hype around this pastrami sandwich wouldn’t live up to expectations, but it did. It’s served on rye and when toasted it’s still quite soft, so it was easy and enjoyable to eat. There’s an abundance of meat and just the right amount of mustard, with plenty of gherkins 😋 A great addition to George Street, who’s food scene isn’t usually my favourite.
Stars ✨ in my eyes after these insane chicken wings last night. I’ve wanted to go to Lucky Yu since the team behind @ilovebodega opened it and I can confirm it was worth the wait! We shared edamame, chicken wings, chicken karaage, prawn gyoza, chicken gyoza, crayfish & chorizo bao, fried chicken bao and pork belly bao. I was devastated because I had my heart set on the chicken katsu sando but they sold the last one just before our order 💔 Luckily everything else was incredible and I love the cosy setting of the restaurant. I’ll definitely be back for that sando (and everything else). ❣️hand model @katiejjeffrey ❣️nails by @alex.sociallypainted